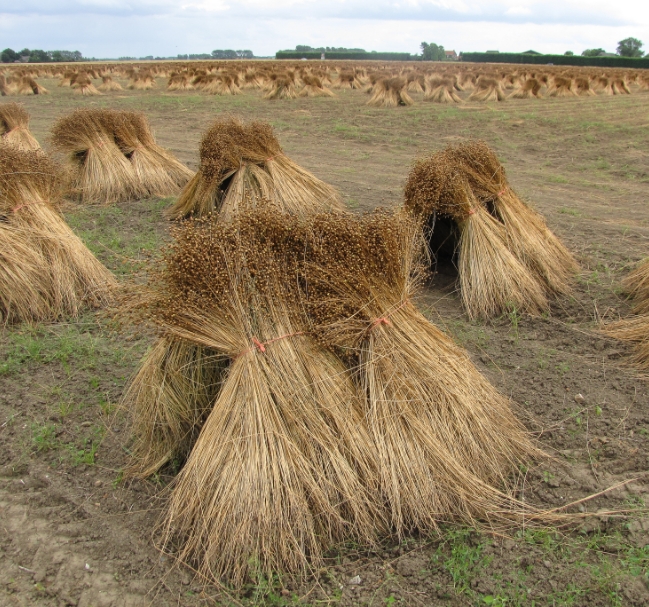 Flax is amongst the oldest fibre crops in the world. Flax fibres are extracted from the bast or skin of the stem of the flax plant. Flax fibre is soft, lustrous and flexible, and is stronger than cotton fibre, but less elastic. The best grades of Flax fibre are used for linen fabrics such as damasks, lace and sheeting. Coarser grades are used for the manufacturing of twine and rope. The legendary linen suit is the symbol of breezy summer elegance due to its exceptional coolness in hot weather with the ability to absorb and release humidity quickly.

Flax, also known as common flax or linseed (Binomial name: Linum Usitatissimum) is a member of the genus Linum in the family Linaceae. It is native to the region extending from the Eastern Mediterranean to India and was probably first domesticated in the Fertile Crescent. Flax was extensively cultivated in ancient Ethiopia and ancient Egypt. A discovery reported in 2009 of spun, dyed, and knotted wild flax fibres in a prehistoric cave in the Republic of Georgia shows that the plant was already in use by humans at the surprisingly early date of 30,000 B.C. New Zealand flax is not related to flax but was named after it, as both plants are used to produce fibres.

New methods of processing flax and the rising price of cotton have led to renewed interest in the use of flax as an industrial fibre. Flax is harvested for fibre production after approximately 100 days, or a month after the plant flowers and two weeks after the seed capsules form. The base of the plant will begin to turn yellow. If the plant is still green, the seed will not be useful, and the fibre will be underdeveloped. The fibre then degrades once the plant is brown.